+POOL is for you, for your friend, for your mom, for your dad, for your girlfriend, for your boyfriend, for your kids, for your boss, for your bosses boss, for your coffee guy, for your burrito guy, for that dude over there, for New York City.
+POOL is for everyone, which is why it’s designed as four pools in one: a Kid’s pool, Sports pool, Lap pool and Lounge pool.
Each can be used independently to cater to all types of swimmers, combined to form an Olympic-length lap pool, or opened completely into a 9,000 square foot pool for play.
Its universally recognizable shape and unusual offshore siting immediately position + Pool as an iconic piece of public infrastructure.
Filtration
Like a giant strainer dropped into the river, + POOL filters river water within its walls, removing bacteria, contaminants and odors, leaving only safe and swimmable water that meets local and state standards. 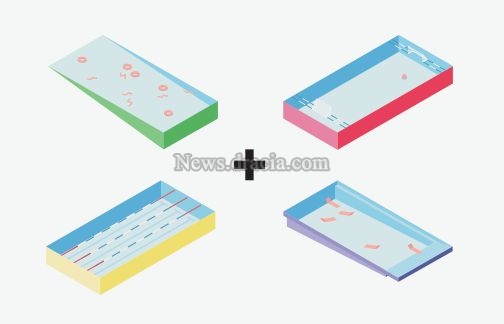 +POOL (or +Pool) is an initiative to bring a floating swimming pool to the East River, on the Manhattan and/or Brooklyn banks, in New York City; a permanent location has yet to been determined. The 9,300 square feet (860 m2) pool would be filled with water filtered from the river it floats in. The two companies behind it, Family New York and PlayLab, have been using the crowdfunding website Kickstarter to raise money for the project.

Concept
The planned cross-shaped, Olympic-sized pool would be used to clean the waters of the East River while providing a public space for water-based recreation. With its current design, the pool would flush out up to half a million gallons of river water daily through a layered filtration system. Over a quarter of a million gallons of filtered river water would be used to fill the pool itself. The planned long-term goal is to raise a total of $15 million to fund the entire pool by 2016.

History
In July 2011, the team raised over $41,000 on Kickstarter to test filtration materials using water from the East River. With the help of researchers at Columbia University, the tests yielded feasibility, and in July 2013 over a quarter million dollars was raised to build a 35 square foot miniature version of the floating pool. The “test lab” is to be a working prototype to analyze its effectiveness in river conditions.
Since its conception, several independent companies have participated in the +POOL project, including engineering firm Arup, design firm IDEO, environmental consultants from One Nature, and art institution Storefront for Art and Architecture. The project has also been met with interest from government officials, notably New York State Senator Daniel Squadron and New York City Council Member Brad Lander. Government approval is still required for the pool to open by 2016.
In November 2013, Time magazine ranked +POOL as one of the 25 best inventions of the year 2013. The pool is projected to open in mid-2016. Via: pluspool, wikipedia