Abandoned luxury former glory
On Sunday, shortly before the morning we found ourselves in the land of frogs’ legs, wine, baguettes and berets. In France, I have long attracted the seat of tobacco magnate with the unofficial name of Château Gloire. That was our goal when we slowly drove through the village, which even did not inspire the feeling that there could be a splendid residence to find. Yet lock soon emerged around the bend.
Access at first glance promised disappointment. The windows were closed, blinds forbidding the passage of the sun downloaded, doors are locked with a lock and chain wrapped creaky gate. Sleepy we stood by the car, it was raining hard, and all around were unwanted viewers. Kate went to find out whether the only entrance is through a fence at a stop near a busy road, or if there is a less obvious way. Meanwhile, what was scouting, mokli in the rain and we had breakfast. She returned with a verdict unpleasant – to climb over the fence in front of almost the entire village. Fortunately, it rained so much that the streets were deserted.
After a while I scrambled onto the fence, then I mumbled into the bushes overgrown garden. The path to the castle was one of the worst experiences of that day. Wet bushes and tall grass soaking us clothes that were torn from mature malinovníků. Worming through the jungle was endless, but ended well. A moment later, I crawled dirty cellar, hoping to find a way into the lock. It seemed hopeless and all the corridors ended boiler room in the rear. 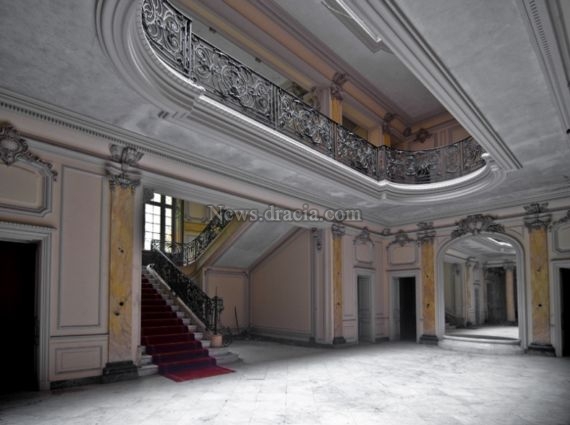 I tried last door – the last hope – for whom the stairs. After their climb appeared prettiest entrance hall that I’ve ever seen. Glass ceiling light fell on the floor from which you ran to the second floor marble stairs with red carpet. At one end of the hall were beautiful entrance door and against the large, still unspoiled, Venetian mirror. The castle was like a fairy tale.
When we were all inside, I went upstairs after ostentatious. The second floor was the opportunity to peek into the entry hall through forged railings and ceiling light streaming in addition to the whole room lit by a large window with painted details. Each of the rooms on the second floor had its own bathroom in Italian black and gray marble. Bath or sinks been destroyed. Spirit former glory and luxury There are more than a hundred years persisted.
In his time functionality already had a magnificent mansion electrification, hot and cold water and one could see solid wood furniture, radiators, expensive wallpapers or elevator. On the ground floor, which I went through last was all-wood lounge, kitchen and bedrooms with beautiful decorations.
Instead we have admired for a long time, trying to get him the best experience, whether in the form of photos, and unforgettable sensations from visiting. We were reluctant to go away, but time ran mercilessly and waited for our long journey home. To crawl into the cellar overgrown gardens thoughts ran through my mind that perhaps this perfect construction does not aim vandals and thieves. Perhaps remains preserved until it finds the owner, who would place could rekindle.
In the desolate garden welcomed us again relentless rain and impenetrable vegetation. Climbing over the fence was not without minor injuries and it was time to take the path toward preserved villa. That day had burned down and we reach the smoldering remnants, we had no idea…