The real Frankenstein’s lab: Carefully pickled kittens, dogs, rats and pig heads discovered deep in abandoned veterinary school
Grisly images captured in the derelict Veterinary School of Anderlecht in Brussels, Belgium
It has lain abandoned and derelict for more than two decades, while surrounding buildings have been developed
Soon, this place too will be transformed into executive homes. But who would want to live there?
Like the components of some abandoned Frankenstein’s monster, the carefully pickled remains of animals lie slowly stewing in jars stowed in this eerie abandoned place.
After decades of neglect, even the formaldehyde that preserves these parts of anatomy has yellowed with age, while the specimens themselves slowly fall apart.
The patina of age colours these scenes from an abandoned laboratory – equipped with anatomical samples including parts of kittens and dogs to a pigs head and even whole rats – with a palette reminiscent of a Gothic novel.

It is all that remains of The Veterinary School of Anderlecht in Brussels, Belgium.
The centre for experimental animal science has stood abandoned since 1990 and, like so many historic places, is soon to be transformed into luxury apartments.
These last glimpses of the gruesome, decaying evidence of endeavour in physiological science were captured by a British urban explorer who prefers to go by the pseudonym Chaos.
He said: ‘The Horror Labs, as this location has been nick-named, is like something out of a horror-film.
My images show what lies behind the walls of a neo-renaissance veterinary school in Belgium which now lies derelict and decaying.
People are initially horrified that this sort of place exists, but are equally intrigued and want to see more.
The site comprises 19 Flemish neo-Renaissance style buildings, constructed in the early 20th Century, which were later incorporated into the university of Liege in 1969.
In 1990 the buildings became derelict and were listed.
All but one of the buildings have since been converted into executive homes. But this grisly secret still hides deep within the bowels of the one remaining, undeveloped structure.
It’s like being in some crazed professor’s laboratory containing all manner of grotesque animal organs and body parts,’ he said.
At any moment you half expect the professor to come bursting through the door to punish you for invading his laboratory.
Strange as this place seems, it once served a crucial purpose, a school dedicated for the training of veterinary surgeons.[sc:BR]
Questa scuola veterinaria abbandonata si trova a Bruxelles, in Belgio, e sembra il laboratorio di uno scienziato pazzo, uscito direttamente da un film horror. Chiunque ci capiti si troverà di fronte a file e file di scaffali pieni di vasi contenenti animali e parti anatomiche di ogni tipo conservati in formaldeide. Secondo alcune voci l’edificio verrà ripulito e adibito ad appartamenti negli anni a venire. La domanda sorge spontanea: chi andrebbe a vivere in un posto del genere sapendo cosa conteneva prima? Via: dailymail, alfemminile 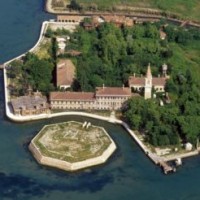