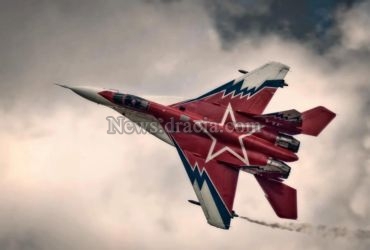 The MiG-29M/M2 fighters belong to the new unified combat aircraft family designed on the basis of MiG-29K/KUB carrier-based fighters.
The power plant includes RD-33MK engines with increased thrust power, equipped with smokeless combustion chamber and new electronic control system (of FADEC type). Engines are of the module structure and have increased reliability and service life.
Upon customer’s request the fighters can be equipped with the modified “all aspect” vectored thrust RD-33MK engine ensuring the aircraft superiority in a maneuvering dogfight. The power plant of two vectored thrust engines was tested on the super-maneuverable prototype-aircraft MiG-29M OVT.
The MiG-29M/M2 fighters are remarkable for the improved operational characteristics and increased reliability of assemblies, systems and units. As compared to the previous fighters the flight hour cost is reduced about 2.5 times. The MiG-29M/M2 fighters are intended for the on-condition maintenance.
The airborne avionics is of the open architecture based on MIL-STD-1553B standard that allows the installation on aircraft of new equipment and weapons of Russian and foreign origin upon customer request.
The fighter has multi-role, multi-mode “pulse-Doppler” type radar “Zhuk-ME” manufactured by “Fazotron-NIIP” Corporation. The radar is provided with the slot array. As compared with radars of the previous generation, “Zhuk-ME” has wider scanning angle in azimuth, twice longer target detection range, less weight and increased reliability. “Zhuk-ME” provides tracking up to 10 air targets with four targets simultaneous firing with missiles.
The MiG-29M/M2 fighters are equipped with state-of-the-art multi-channel IRST with target designation system to the anti-radar passive war-head missiles.
There is the possibility of installation on aircraft of IR and laser sighting equipment pods for ground targets illumination.
Weapons system includes “A-A”, “A-S” missiles, guided aerial bombs, rockets, aerial bombs and built-in air-gun of 30 mm caliber. Upon request of the customer the new types of weapons can be applied. The MiG-29M/M2 fighters weapons allow to destruct air targets as well as the movable and stationary ground/surface targets.
Both the single and double seat versions of aircraft have the same airborne equipment and weapons as well as the high unification level of structure.
For the MiG-29M/M2 fighters the full set of training means was developed. Via: migavia