Twenty of the Dumbest Inventions of the 20th Century
Let’s look at how far can the human imagination go, when people have too much time on their hands.
Maybe these inventions are not that stupid but the fact is that they are unnecessary. Well, it’s the human nature – always wanting to experiment and invent. This is a good thing though ;)

Curved Barrel Machine Gun, 1953
The 20th century saw many astounding technological innovations. The automobile revolutionized the way people live and work, the internet changed the way people think about information, and the U.S. of A put a man on the moon. But some technological advances that came in the earlier part of the 20th centry weren’t exactly meant for the history books. Because they were stupid. Take, for example, this M3 sub-machine gun with a curved barrel for shooting around corners. It’s the perfect gun for the “shoot first, look where you’re shooting later” kind of guy.

Anti-Bandit Bag, 1963
Inventor John H T Rinfret demonstrates his anti-bandit bag. To foil thieves the chain is pulled and the bottom of the case falls out so the contents are scattered over the floor. That’ll stop those thieves from getting at the contents of your bag! No, wait. It won’t.

Hubbard Electrometer, 1968
American science fiction writer and founder of the Church of Scientology L. Ron Hubbard uses his Hubbard Electrometer to determine whether tomatoes experience pain, 1968. His work led him to the conclusion that tomatoes “scream when sliced.”

Baby Cage, 1937
A nanny supervising a baby suspended in a wire cage attached to the outside of a high tenement block window. The cages were distributed to members of the Chelsea Baby Club in London who have no gardens, or qualms about putting a child in a box dangling over a busy street.

Illuminated Tires, 1961
A woman adjusts her stocking by the light of the Goodyear’s illuminated tires. The tire is made from a single piece of synthetic rubber and is brightly lit by bulbs mounted inside the wheel rim.

Shower Hood, 1970
For the woman who likes to put makeup on her dirty face.

Yodel Meter, 1925
Two girls try out the new yodel meter, which measures the pitch of the human yodel.

Flying Platform, 1956
Flying platforms being tested at an Air Force base.

Venetian Blind Sunglasses, 1950
It was a bad idea then, it’s a bad idea now. Sorry, Kanye.

Phone-Answering Robot, 1964
A robot designed by Claus Scholz of Vienna answers the phone, though it cannot speak. Halfway there, Claus.

Baby Holder, 1937
Jack Milford, player with the Wembley Monarchs ice hockey team, has invented a carrying device so that his baby can join his wife and himself on the ice. Because who wouldn’t want to take something as fragile as a baby onto a rock-hard surface with very little friction?

Cat-Mew Machine, 1963
This mechanical cat can meow ten times a minute and the eyes light up each time. The device for scaring rats and mice is from Japan and is powered by a two-watt motor. 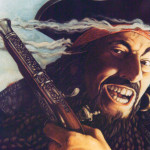 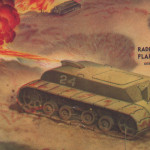